Because we can take care of all the stages of a film production, from A to Z (fiction, documentary, video, advertising).
Our executive production offers a study tool for your project, establish a provisional budget, cast (actors and extras), find you the most beautiful and unusual places for your scenes... Follow your preproduction, organize the shoot and post-production, and if you desire, create original music…all thanks to the team at Michaël Productions and its partners.
You can entrust to us part of or the entire executive production of your project. In any case, we will find quick and effective solutions through our team and partnerships.
Why shoot in France?

"An unbelievable and affordable range of filming locations"

France enjoys a breathtaking range of locations, from mountains to surf spots, from deserted old volcano landscapes to idyllic coastal locations such as the Riviera, on mainland France as well as the overseas territories. An amazing number of historical monuments can satisfy the needs of any period film, thriller, future apocalyptic drama or romantic comedy. As for affordability, you can shoot at world famous landmarks, such near the Eiffel Tower in daylight or Notre Dame Cathedral for free! You will not be charged for shooting on the streets of Paris, as opposed to in some other capitals.
State of the art facilities
Top level facilities, including studios, digital labs and VFX houses that have worked on major productions such as The Dark Knight, Harry Potter, Avatar, The Minions, Thor, Inception, or more recently Pablo Larrain’s Jacky, filmed in one of the Paris Studios. 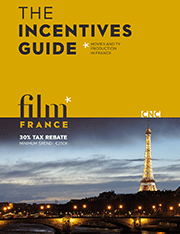 How does the incentive work ?
The TRIP supports non-French projects that are completely or partly made in France. To be eligible, projects must pass a cultural test, which assesses European cultural elements in the story as well as French and European locations, characters, sources, landmarks, creators, crew and French technical hubs. For live action, there's a minimum of 5 days of shoot here necessary. For animated productions and VFX-intensive projects, there is a dedicated cultural test, acknowledging the specificities of the genre.

The amount allocated comprises 30% of the film expenditures incurred in France, and caps at € 30 million per project. The foreign producer needs to contract a French company to handle the shoot in France or/and the making of the animation / VFX shots via a production service agreement. At the end of the French's company fiscal year, the production services company claims the rebate. The money is paid by the tax authorities, and received half to one and a half year after the last expenditure.

NB: The TRIP is exclusively targeting non-French productions. so you'll have to choose: either the project becomes French - via a co-production treaty and the CNC or the project gets the TRIP. You'll find more about this in the Incentives Guide.

Security and Transport !!
France has a great domestic transportation network with motorways and high-speed trains, excellent international flight connections.
Since last November, priority has been given to security with wider powers granted to the various forces tasked with protecting the population, including workers and tourists.
France remains one of the world top destinations for travelers.
Dedication to filmmaking and quality of the crews
Skilled talents and highly trained crews contribute every year to the production of  250 features, as well as more than 4800 hours of television shows in France.
They work fast with a spirit of initiative, which seduces even the most demanding directors such as Woody Allen, Martin Scorsese, Lasse Hallström, Steven Soderbergh, Doug Liman, Stephen Frears, among others. Solutions are available to fit all budgets, at all price ranges, from big movies such as Besson’s blockbuster Lucy to small-crew low-budget filmmaking.

Dedicated agencies to provide assistance to foreign productions
The Film France network with its 41 local film commissions throughout the country offers free information on locations, crews, labor rates and facilities.
Film France is a state-funded agency supported by the French national center for cinema.
... And if you want to shoot elsewhere, we offer to you Italy !!!
Thanks to our partners, we can arrange shoots in Toscana, Marche, Campania or Lazio...
.
Retourner au contenu